Install the react-mentions package via npm:

MentionsInput is the main component rendering the textarea control. It takes one or multiple Mention components as its children. Each Mention component represents a data source for a specific class of mentionable objects, such as users, template variables, issues, etc.

The MentionsInput supports the following props for configuring the widget:

Each data source is configured using a Mention component, which has the following props:

If a function is passed as the data prop, that function will be called with the current search query as first, and a callback function as second argument. The callback can be used to provide results asynchronously, e.g., after fetch requests. (It can even be called multiple times to update the list of suggestions.)

react-mentions supports css, css modules, and inline styles. It is shipped with only some essential inline style definitions and without any css. Some example inline styles demonstrating how to customize the appearance of the MentionsInput can be found at demo/src/examples/defaultStyle.js.

If you want to use css, simply assign a className prop to MentionsInput. All DOM nodes rendered by the component will then receive class name attributes that are derived from the base class name you provided.

If you want to avoid global class names and use css modules instead, you can provide the automatically generated class names as classNames to the MentionsInput. See demo/src/examples/CssModules.js for an example of using react-mentions with css modules.

You can also assign className and style props to the Mention elements to define how to highlight the mentioned words.

Due to react-mentions' internal cursor tracking it is not good enough to simulate the editing of the textarea value using ReactTestUtils.Simulate.change. We recommend using @testing-library/user-event for a realistic simulation of events as they would happen in the browser as the user interacts the textarea.

Spawn a development server with an example page and module hot loading all set up:

RIFM - React Input Format & Mask Is a tiny (≈ 800b) component (and hook) to transform any input component into formatted or masked input. Demo Highlig

Input masking component for React. Made with attention to UX.

react-input-mask Input masking component for React. Made with attention to UX. This is a development branch for version 3.0. For the latest stable ver

A react component for digit inputs

A react component for digit inputs. It might be very useful to get SMS codes from user on two factor authentications and in many other scenarios when you need get an numerical input from user digit by digit.

A fully customizable, one-time password input component for the web built with React.

A React component that decorates it's children with mouse/touch position tracking, a status toggle fired by click/gesture events, and more.

A React component that decorates it's children with mouse/touch position tracking, a status toggle fired by click/gesture events, and more.

React component that handles csv file input and its parsing

A fully customizable, one-time password input component for the web built with React 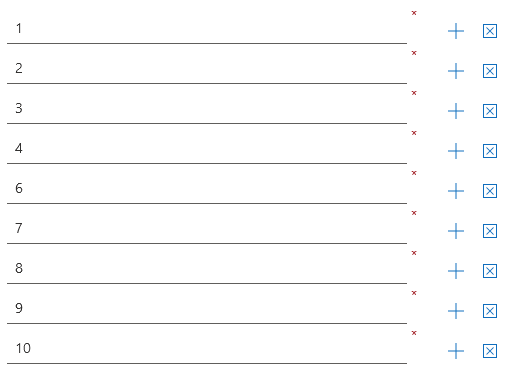 ⚠️ This library is not maintained. Pull-requests and issues are not monitored. Alternatives to text-mask include: https://github.com/uNmAnNeR/imaskjs

A numpad for number, date and time, built with and for React.

React numpad A numpad for number, date and time, built with and for React. It's written with the extensibility in mind. The idea of this project is to