The best way to build animation compositions for React. The best way to build animation compositions for React. Design and compose a component to start with, a component to end with, and Flight will take it from there.

Flight tries to be for React what Principle is for Sketch compositions - the fastest, most friction free way to compose and an effortless way to animate an idea, an interaction, or a short movie-like composition in a self-contained widget (a React component after all).

Check out the new video: 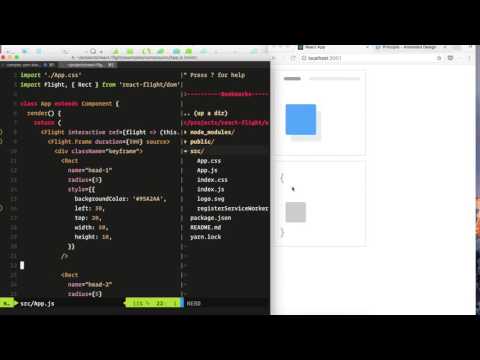 Just clone and use the example, built around create-react-app:

And now you can frame your compositions in anim.js, require and place it in any other React component.

NOTE: jQuery is currently a requirement of one of react-flight's dependencies. We plan to rebuild that dependency any way, obsoleting this requirement in the process (also: PRs accepted!).

When you're designing compositions, focus on designing frames. The first frame is marked source because that's the starting point, and interactive because you want to play with it while you go.

While designing, you want to have showFrames on. It will unpack all of the frames in front of you, so you could edit them while watching them. With Webpack hot-reload this becomes a fantastic experience.

This is where the ref addition comes in:

Once you can grab an instance of flight you can flight.play() and flight.reset() on demand from your own components and actions.

If you're using Redux, there's basic support for it. Basic in the sense that react-flight is not going to handle deep renders of a stateful app with all its gotchas, so YMMV.

You can check out this Redux example for a fully working solution.

For your app, you can enable Redux support by indicating inclusion of store before using the Flight component:

If you want to hack on react-flight, here are some context to keep in mind.

react-flight does some cool stuff and some DOM-heavy stuff (perhaps less cool?). For the cool stuff, it walks the component tree, makes decisions about what should move where, and builds a clean and nice declarative data structure that represents the way compositions should behave.

Currently it will then hand over this data to a DOM-based adapter, that also uses Velocity.js, so that it would actually orchestrate the animations. This is where you're welcome to plug in your own adapter - another animation engine, React Native, and what not.

Fork, implement, add tests, pull request, get my everlasting thanks and a respectable place here :).

To all Contributors - you make this happen, thanks!

react-tweenful Looking for an amazing React library for animating stuff? Look no more, we've got you covered! Demo https://teodosii.github.io/react-tw

react-anime (ﾉ´ヮ´)ﾉ*:･ﾟ✧ A super easy animation library for React built on top of Julian Garnier's anime.js. Just place an <Anime> component and what

react-spring is a spring-physics based animation library that should cover most of your UI related animation needs. It gives you tools flexible enough

particles-bg React component for particles backgrounds This project refers to the source code of the Proton official website, I packaged it into a com

⚛️ Perform animation and transition of React component with ease.

⚛️ Perform animation and transition of React component with ease.

An animation package for react-ui-ox and the community

A react add-on for drawing polygons for any number of sides, as well as animation

react-polygon A react add-on for drawing polygons for any number of sides, as well as animation Demo https://peteroid.github.io/react-polygon/ Usage n

react-spring is a spring-physics based animation library that should cover most of your UI related animation needs. It gives you tools flexible enough