Congrats! You just saved yourself hours of work by bootstrapping this project with DTS. Let’s get you oriented with what’s here and how to use it.

This DTS setup is meant for developing React component libraries (not apps!) that can be published to NPM. If you’re looking to build a React-based app, you should use create-react-app, razzle, nextjs, gatsby, or react-static.

If you’re new to TypeScript and React, checkout this handy cheatsheet

DTS scaffolds your new library inside /src, and also sets up a Vite-based playground for it inside /example.

The recommended workflow is to run DTS in one terminal:

This builds to /dist and runs the project in watch mode so any edits you save inside src causes a rebuild to /dist.

Then run either Storybook or the example playground:

Run inside another terminal:

This loads the stories from ./stories.

NOTE: Stories should reference the components as if using the library, similar to the example playground. This means importing from the root project directory. This has been aliased in the tsconfig and the storybook webpack config as a helper.

Then run the example inside another:

The default example imports and live reloads whatever is in /dist, so if you are seeing an out of date component, make sure DTS is running in watch mode like we recommend above.

To do a one-off build, use npm run build or yarn build.

To run tests, use npm test or yarn test.

Code quality is set up for you with prettier, husky, and lint-staged. Adjust the respective fields in package.json accordingly.

Jest tests are set up to run with npm test or yarn test.

This is the folder structure we set up for you:

We do not set up react-testing-library for you yet, we welcome contributions and documentation on this.

tsconfig.json is set up to interpret dom and esnext types, as well as react for jsx. Adjust according to your needs.

Two actions are added by default:

Please see the main dts optimizations docs. In particular, know that you can take advantage of development-only optimizations:

You can also choose to install and use invariant and warning functions.

The appropriate paths are configured in package.json and dist/index.js accordingly. Please report if any issues are found.

The Playground is just a simple Vite app, you can deploy it anywhere you would normally deploy that. Here are some guidelines for manually deploying with the Netlify CLI (npm i -g netlify-cli):

Alternatively, if you already have a git repo connected, you can set up continuous deployment with Netlify:

Per Palmer Group guidelines, always use named exports. Code split inside your React app instead of your React library.

There are many ways to ship styles, including with CSS-in-JS. DTS has no opinion on this, configure how you like.

For vanilla CSS, you can include it at the root directory and add it to the files section in your package.json, so that it can be imported separately by your users and run through their bundler's loader.

When creating a new package with DTS within a project set up with Lerna, you might encounter a Cannot resolve dependency error when trying to run the example project. To fix that you will need to make changes to the package.json file inside the example directory.

Change the alias to point to where those packages are actually installed. This depends on the directory structure of your Lerna project, so the actual path might be different from the diff below.

An alternative to fixing this problem would be to remove aliases altogether and define the dependencies referenced as aliases as dev dependencies instead. However, that might cause other problems.

Fully customizable, easy to use checkbox with flexible component by React Native on Android and iOS

A simple to use interval timer for boxing

React Native ssl pinning and cookies handling based on okhttp3 on (Android). and AFNetworking on (iOS) 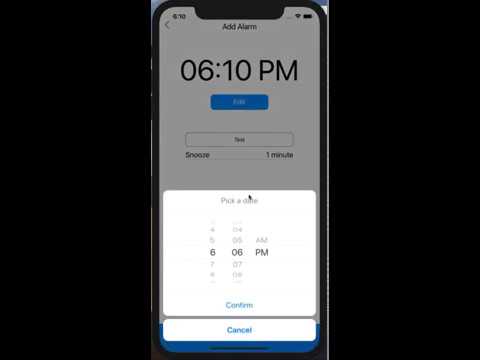 Typescript and web app aficionado from Houston, I write stuff that makes the web do things.

A Web project built using ReactJs that asks the user a few questions, then based on the answers provided we suggest him some games that might be suitable for him.

Easy to use CoreNFC for React Native

React Native NFC for iOS ⚠️ Apple CoreNFC is only available for iOS11 on iPhone 7 and iPhone 7 Plus devices. It does not seems to be available on simu

Use ESBuild to make your React Native code bundle faster.

A wrapper of Lock to use with React Native (iOS & Android)

A wrapper of Lock to use with React Native (iOS & Android)

Simple, best and easy to use radio buttons for react native apps.