This library was built while I was searching an elegant way to interact with web endpoints in my typescript based apps in such a way that I don't need to remember all endpoints, their return types, payload types ecc.. For sure you can create constants for your endpoints and add tricky typescript types to map request and responses, but I was looking for a standard way to easily use in all my apps.

I was using the awesome library React Query for my networking operations, and I was (and still) really love it, but it is lacking a way to map query keys with their underling types.

After some struggling I found a pattern which is working for me, so I built a library on top of this idea.

This library is built on top of React Query's api (so if you know how to use it, you don't need to learn anything new), and uses Axios for the networking.

By strongly relying on typescript's type augmentation, this library will allow you to define the endpoints your app is using and strongly link types to them.

By using typescript's augmentation feature, you will define your routes along with response and payload types and then you will be able to have strong typing for your endpoints

A companion web application to define the routes and generate the full api configuration is under development, please start this repository if you are interested in it

Built On Top Of

you need to have the following libraries already installed:

Install the library from npm registry

This is an example of how to list things you need to use the software and how to install them.

This library is a wrapper around react-query, so before you begin using this library, you need to install and configure react-query as explained in their docs.

react-query-typed-api is also heavily based on the concept of augmentation, you can find more about typescript augmentation in the dedicated documentation.

The first interface to know about is AppRoutes, which is declared as follows

The statement main: MainApi means that the app has one default api, whose scope is main. You can create as many scopes you want, we will speak about api scopes later on .

In order to agument the main scope and add your routes, you have to augment MainApi interface

let say we augment our main api like this

With such configuration you will have the following typescript behavior

IMPORTANT: every entry under MainApi must have these fields:

payloadType optional, it represents the type of the payload for mutations, responseType will be used if not provided

mutationResponseType optional, it represents the response type for mutations, responseType will be used if not provided

useAppQuery is nothing else that a wrapper around react-query's useQuery, it just wraps it with strong typing thanks to typescript augmentation. Together with useAppQuery there is also useAppMutation

As your can see, types are automatically inferred based on the types declared through augmentation

You can also use routes with variable parameters. Given we augment the api like this

A note about mutate and mutateAsync methods: In react-query, when you call mutate or mutateAsync, you can just pass the payload for the request and an options object where you can pass just some callbacks. To allow the best possible integration for path params, we added _pathParams as a valid field to pass to mutate and mutateAsync, because sometimes it may be tricky to have the values to use as path variables at the moment you call useMutation (imagine for example a form submission, you most probably will have the value you need only when the form is submitted).

Since this field will never be passed to the request payload, we prefixed it with underscore to allow you to pass a pathParams field (without underscore) to you payload in case you may need. If you will need to pass a _pathParams field to your payload, it will not work

You can use augmentation to add as many set of apis as you need, you just need to augment the interface AppRoutes. An api scope is intended to be a group of endpoint pointing to the same server and having the same prefix. Let say you augment it in the following way

You will be able to use the other scopes like this

You will have full intellisense also in this case

After you have defined all of your routes, you need to initialize the library by providing the server informations for all the defined api scopes. A good point to do this could be the same point where you initialize react-query's queryClient and pass it to the app's context (as explained in their docs)

SERVER CONFIGURATION The servers field is an object which accepts the following values:

routeOrRouteObj (mandatory) This parameter can be:

The useAppMutation hook will take in input the same parameters as useAppQuery(), plus the payload property which represents the request's payload.

Together with useAppQuery and useAppMutation, we also crafted useAppQueryClient, a wrapper around queryClient, you can use it the following way

The following methods have been ported

Here is an example how how it works with invalidateQueries method, but it works the same with the other methods

The way useAppQuery and useAppMutation works is exacly the same as react-query. Since this is 100% true for useAppQuery, on useAppMutation we added there is a small difference one as the although useAppQuery can be used in the same and exact way as useQuery is used, some little change has been added to mutate and mutateAsync

See the open issues for a full list of proposed features (and known issues).

Contributions are what make the open source community such an amazing place to learn, inspire, and create. Any contributions you make are greatly appreciated.

If you have a suggestion that would make this better, please fork the repo and create a pull request. You can also simply open an issue with the tag "enhancement".

Don't forget to give the project a star! Thanks again!

Distributed under the MIT License. See LICENSE.txt for more information.

A very simple wrapper of pinia to try difference API 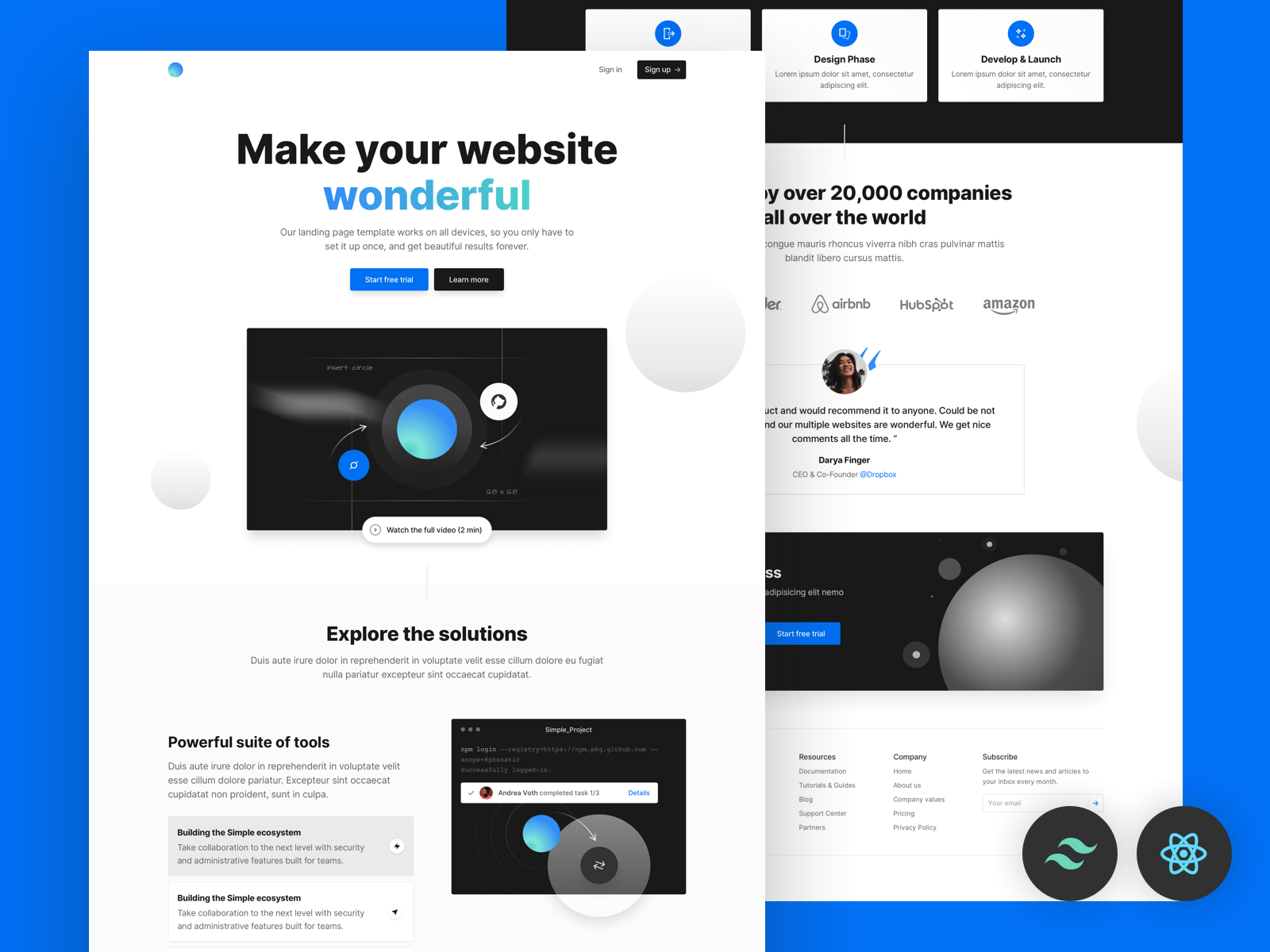 Simple Light is a free landing page template built on top of TailwindCSS and fully coded in React. Made by

Simple Light is a free landing page template built on top of TailwindCSS and fully coded in React. Made by

A React hook to wrap react-query results with fp-ts-remote-data results.

The thirdweb React SDK provides a collection of hooks to use in your React apps to interact with your thirdweb contracts.

This is a Next.js project bootstrapped with create-next-app. Getting Started First, run the development server: npm run

React Query for Firestore, that you can actually use in production, on every screen.

React Query for Firestore, that you can actually use in production, on every screen.

Github-ci-cd-react - I followed CI/CD course from codedamn to learn how to implement github actions in a project, in this practical lesson with codedamn am using ReactJS

Implement Screen free reminder with react & redux This project was bootstrapped with Create React App. Available Scripts In the project directory, you

🙏 Implement any design system in React

Example implementation of how to implement Sign In with Ethereum

React People lists and connects React developers around the world.

React People React People lists and connects React developers around the world. Progress View the Project page for details on what's planned and what'

react-query-restful is just a small collection of hooks that make it easy to integrate React Query into a REST API.